After all, why there was a ruckus in the Delhi Mayor election? 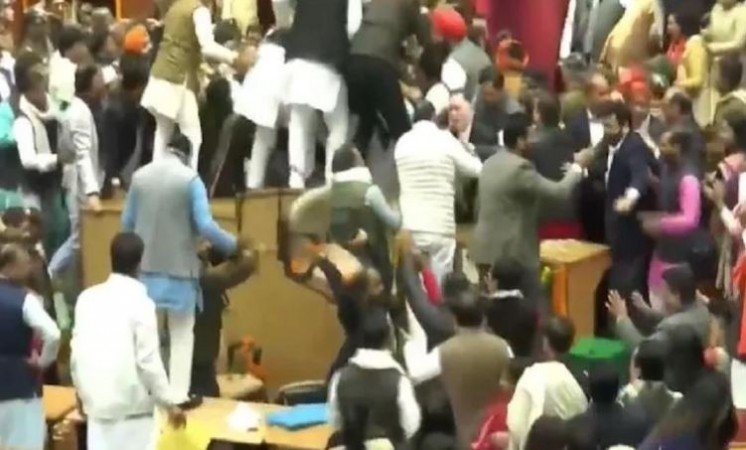 New Delhi: There was a lot of uproar in the election of the mayor of the Municipal Corporation of Delhi on Friday. As soon as the proceedings of the house started, the councilors of Bharatiya Janata Party and Aam Aadmi Party got into scuffle and fight. In view of the tremendous uproar in the House, it had to be canceled. The Aam Aadmi Party councilors were upset over the presiding officer’s nomination of the nominated members being administered the oath first.

Let us tell you that after that, the councilors of Aam Aadmi Party started a ruckus in the house. The Aam Aadmi Party councilors started creating ruckus and then they raised slogans in front of the presiding officer’s table. In fact, the victory and defeat in the Mayor’s election in Delhi is to be done by a very small margin, for this both the parties are engaged in manipulations. On behalf of the AAP, it was alleged that the Bharatiya Janata Party is conspiring to give voting rights to the 10 nominated councilors.

After the uproar in the proceedings of the Municipal Corporation, Bharatiya Janata Party MP Pravesh Verma said that our women councilors were misbehaved. The councilors who came drunk hurt him with sharp objects, pieces of glass and pulled his hair. Along with this, the woman councilor of the Bharatiya Janata Party alleged that she was manhandled, prevented from taking oath by using foul language. There cannot be a blacker day in the history of MCD than this. The woman councilor of Bharatiya Janata Party told that our fellow councilor Anita ji was beaten up by you councilors. Your councilors were pulling his hair. Was sitting on top of them. As soon as we got up to take the oath, they started a ruckus. We calmly told not to do this. They have made the house in such a bad condition. After this incident, the leaders are giving different reactions.