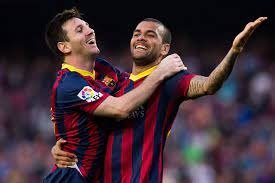 Dani Alves, a renowned player for Brazil’s national team, was detained by cops on Friday after being accused of sexual assault.  Dani Alves has also been charged with sexual assault in Spain. In Barcelona, Alves and Lionel Messi shared the field. He is reportedly the oldest Brazilian football player competing in the World Cup right now. In a statement to the media, the police said that on December 31 in a nightclub in Barcelona, Dani Alves had sexually assaulted a lady. On January 2, the woman filed a complaint against him. She claims that Alves also touched her inappropriately.

The police report states that while attempting to insert his hand inside the woman’s pants, the Brazilian football player touched her private area. Let us also tell you that 39-year-old Dani Alves also acknowledged visiting the nightclub. He has, however, refuted the sexual harassment claims. I was there, he said, “Yes.  Like everyone else, I was enjoying myself. My fondness for dancing is well-known to those who know me. I was dancing quietly so as not to annoy anyone. That woman and I are complete strangers. No one has been victimized by me.”

Let us tell you that in the FIFA World Cup, Dani Alves was a part of the Brazil squad. When Dani Alves led the squad against Cameroon, he made history by being the oldest Brazilian football player to participate in a World Cup game. Alves has experience playing for illustrious teams like Barcelona, Juventus, and Paris Saint-Jean. Currently playing for a club in Mexico. He traveled to Barcelona for a vacation. For Brazil, Dani Alves participated in 126 games and tallied 8 goals. Brazil did not perform as predicted during the FIFA World Cup. In the quarterfinals, They lost.