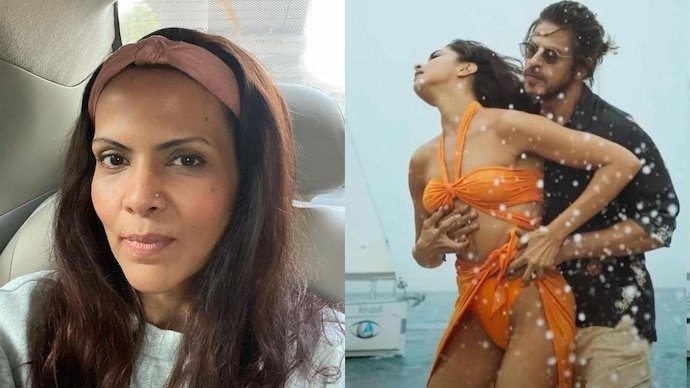 Nowadays it seems to be becoming a trend to escalate controversy regarding new movies. Now a new controversy is coming to the fore regarding Shah Rukh Khan’s much-awaited film ‘Pathan’. In fact, there was a controversy surrounding the movie Pathan’s recently released song “Besharam Rang.” People have been calling for a boycott of the movie on social media ever since Deepika Padukone demonstrated her bold style in the film’s song. On Twitter, #pathaanboycott also became trendy. Besharam Rang is allegedly loaded with obscenities. On the other side, Deepika’s bikini and several of the song’s scenes have caused controversy.

Shah Rukh Khan is coming back to the Bollywood screens after almost 4 years with the movie Pathaan, and its first song ‘Besharam Rang’ has been embroiled in controversies. By wearing a saffron bikini in the song, Deepika Padukone is allegedly offending Hindu sentiments. Vishal Dadlani, Shekhar Ravjiani, Caralisa, and Shilpa Rao are the singers of the Besharam Rang song. This song includes some Spanish-language lyrics as well.

Composer Vishal Dadlani and singer Caralisa have shared their thoughts on this song in light of the escalating controversy. In an interview, Caralisa said- “The only thing I relate the saffron color is with our national flag, where it represents bravery and sacrifice. I am unsure of which (Madhya Pradesh Minister) politician committed the crime, but I am confident that there are many more critical problems facing our nation than the coloring of a fictional character’s outfit..”

Vishal Dadlani and Vishal Shekhar, the song’s composers stated, ”Besharam Rang is a unique song. It is incredibly interesting music since it combines a variety of styles. It has an electronic sound with an almost retro feel that is influenced by afro beats.” Within the first hour of its publication, Besharam Rang received one million views on YouTube. The song has received over 47 million views on YouTube concurrently. The only Pathaan song that has so far been made public is this one. However, it now holds the top spot in the social media platform’s trending list.