Govinda Naam Mera Review : Shashank Khaitan set out to deliver an entertaining comedy and mystery like a 90’s hindi film. 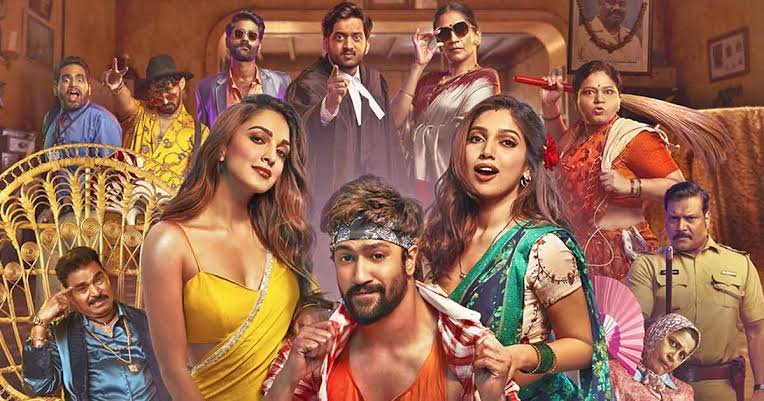 Govinda Naam Mera is the story of Govinda A Waghmare (Vicky Kaushal), a dancer in the Hindi film industry who dances in the back row of the hero, but when he meets someone, he introduces himself as a choreographer. He is having an affair with fellow dancer Suku, with whom he dreams of marrying and making it big.

Vicky playing the titular role is going through various issues of abusive wife, step brother torture, career issue. Then a murder happens and that turns Govinda’s life. Vicky Kaushal from his serious portray roles in Uri , Raazi , here we could see a guy in a fun mode. The local mumbai dialect delivery was quite interesting .Kiara Advani had given a notable performance.Bhumi’ s performance doesn’t offer anything new. Moreover, her screen presence was also less.When movie reaches to its last 30 minutes, predictability triggers & then just wanted to watch to get the answer of Govinda Naam Mera offers laughter from Renuka Shahane ( govinda’s mother) , Amey Wagh ( govinda’s friend). Decision to release on a streaming platform was good.

A separate film can be made on the making of the film ‘Govinda Naam Mera’. Director Shashank Khaitan, who has made two decent films with Varun Dhawan, was earlier titled ‘Mr Lele’. When Varun Dhawan did not like its story, Karan Johar had put a lock on the film itself.Apart from comedy and thriller, the film also contains elements of con films. Govinda Naam Mera Vishuddha Masala is a movie directed by Shashank Khaitan. The treatment of the story, acting and events has been kept in such a way that there is an undercurrent of humor in it. The film gives a feel of comedy for some initial period, but after a point it turns into a thriller and this is the part which saves Govinda Mera Naam from being a complete dud. Property dispute angle with husband, wife and her girlfriend.

Entertainment package film is quite good enough and much thrilled too. Acting by all the starcasts are just fabulous. Music, screenplay, dialogue delivery is brilliant & worth watching! Finally after so long bollywood came up with such an amazing movie.